President Nana Addo Dankwa Akufo-Addo handed over the vehicles to the GAF at a ceremony in Accra. Dubbed Cobra II, the specialised vehicles are armoured personnel carriers. They are to help the GAF to contain and even better the security threats posed at the northern borders, as well as provide the necessary protection for the western and eastern frontiers.

The President described the vehicles as strong and versatile, which would support the GAF to prevent and contain security threats at the country’s borders, including the northern, western and eastern frontiers.

Armoured vehicles The specially designed vehicles are fitted with winches – lifting devices consisting of a rope winding round a rotating drum for self-recover when the vehicles get stuck. They are also equipped with cameras at the front and the rear to enable the drivers monitor what happens around them. The vehicles are also fitted with gun ports and vision windows to enable the crew to observe and return fire and also provide protection for ground troops against mines and small arms fire. They have fire suppression systems which enable the detection of fire in them that enables them to self-trigger automated fire extinguishers to suppress or quench the fire. Their Hutchison puncture proof also enables the drivers to steer the vehicles to a safe distance of about 50 kilometres when the tyres are fired at, while the central tyre inflating system (CTIS) allows the drivers to inflate and deflate the tyres for various road conditions without having to come down from their seats.

Commendation The President commended the GAF for the significant role they played in protecting the territorial integrity and stability of the country on a daily basis, saying: “My highest commendation goes to all ranks for your outstanding performance in the recent Operation Peace Trail which provided security for the 2020 presidential and parliamentary elections.” He also expressed appreciation to the GAF for their commitment to other security operations, including the ongoing Operation Conquered Fist and Motherland, intended to secure a peaceful atmosphere at the north-western, northern and north-eastern borders of the country, as well as contain activities of secessionists along the eastern frontier. President Akufo-Addo further urged them not to let down their guard of detering potential aggressors who might attempt to derail the political and socio-economic gains the country had achieved over the years. “We all know that the rapid economic transformation and accelerated growth that we seek can only be realised in an atmosphere of peace, tranquillity and security,” he said. The President gave an assurance that the government would continue to address the logistical needs of the GAF to enable them to perform their role effectively and efficiently. Provision of resources The Minister of Defence, Mr Dominic Nitiwul, also said the government would provide more resources to the GAF to combat threats posed within and outside the country, adding that the GAF needed real time surveillance capability, high moral, force protection, fire power and communication tools. He said the GAF had been resourced with 73 APCs within the last three years, and that the equipment was procured in three batches for the 153 Armoured Regiment in Accra in 2018, 154 Armoured Regiment in Sunyani in 2019 and the 155 Armoured Regiment in Tamale in 2021. 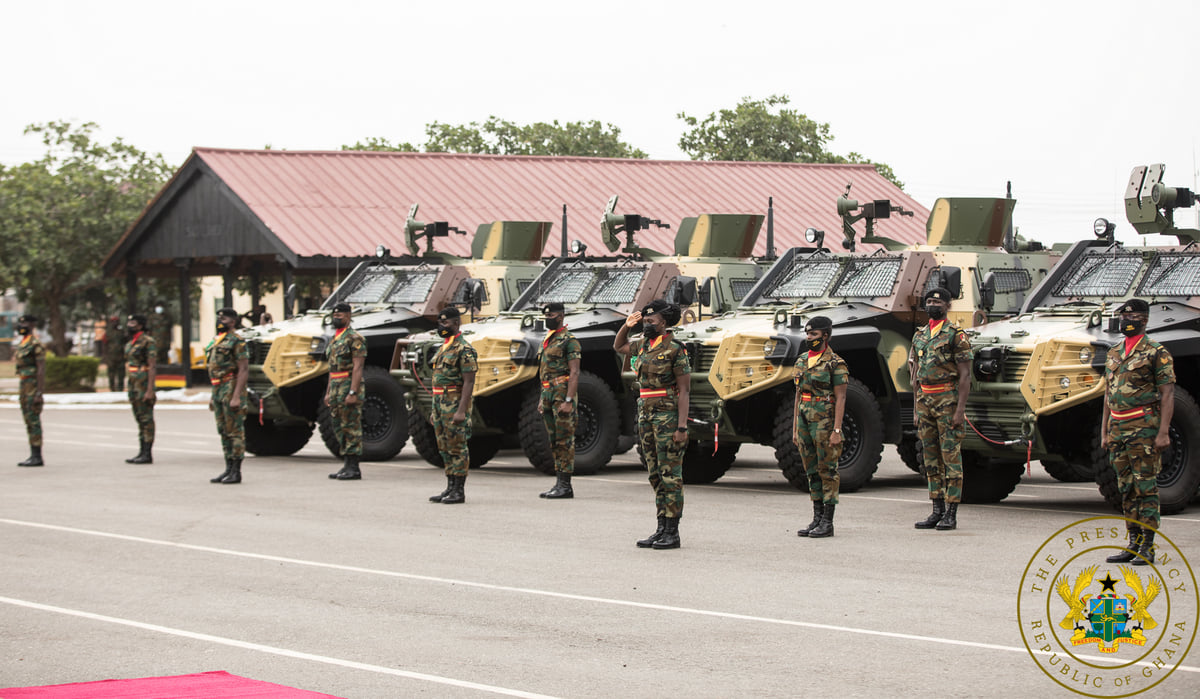